The January 17, 1995 Hyogoken-Nanbu earthquake of magnitude 7.2 in JMA scale (Mw = 6.9), which struck Kobe, Japan and its surrounding area was the most severe earthquake to affect that region this century. The earthquake resulted in more than 6,000 deaths and over 30,000 injuries. Fires following the earthquake incinerated the equivalent of 70 U.S. city blocks. They together destroyed over 150,000 buildings and left about 300,000 people homeless. The economic loss as a result of this earthquake is estimated to reach $200 billion.

The California Geological Survey studies earthquakes to help Californians plan and build earthquake resistant communities. We record the strong ground motion from earthquakes, study the distribution of historic earthquakes and evaluate faults that are the source of earthquakes. We combine that information to prepare maps showing the potential for ground shaking, fault rupture, liquefaction and seismically induced landsliding.

Earthquakes in the past 7 days of magnitude 4.0 or greater

The NEIC was transferred to Boulder, Colorado, in 1972 and made part of the U.S. Geological Survey in 1973. The NEIC was moved again in 1974 to its present location in Golden, Colorado.
The National Earthquake Information Center (NEIC), a part of the Department of the Interior, U.S. Geological Survey, is located in Golden, Colorado, 10 miles west of Denver. The NEIC has three main missions. First, the NEIC determines, as rapidly and as accurately as possible, the location and size of all significant earthquakes that occur worldwide. The NEIC disseminates this information immediately to concerned national and international agencies, scientists, critical facilities, and the general public. Second, the NEIC collects and provides to scientists and to the public an extensive seismic database that serves as a solid foundation for scientific research, principally through the operation of modern digital national and global seismograph networks and through cooperative international agreements. The NEIC is the national data center and archive for earthquake information. Third, the NEIC pursues an active research program to improve its ability to locate earthquakes and to understand the earthquake mechanism. These efforts are all aimed at mitigating the risks of earthquakes to mankind; and they are made possible by the fine international cooperation that has long characterized the science of seismology.

Subduction zones are plate tectonic boundaries where two plates converge, and one plate is thrust beneath the other. This process results in geohazards, such as earthquakes and volcanoes

Subduction zones are plate tectonic boundaries where two plates converge, and one plate is thrust beneath the other. This process results in geohazards, such as earthquakes and volcanoes. 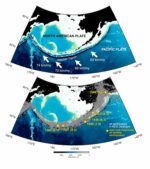